There are several types of 3D scanners and 3D scanning equipment. Each of them is suitable for a different application. Below you will find a quick guide:

The 3D scanner consists of a projector and a camera (or multiple cameras) mounted together on a rig or built as one piece of hardware. Most of the 3D scanners are controlled via computer. The projector projects a set of images on a given object. The image itself (structured light) is usually a set of stripes or a pattern similar to QR code. The pattern “bends” when projected on the surface of the scanned object. The camera looks exactly at the area where the projector beams. In an instant, the camera captures the distorted pattern just like a regular camera would. The 3D scanner saves the captured picture and the original pattern to a computer. 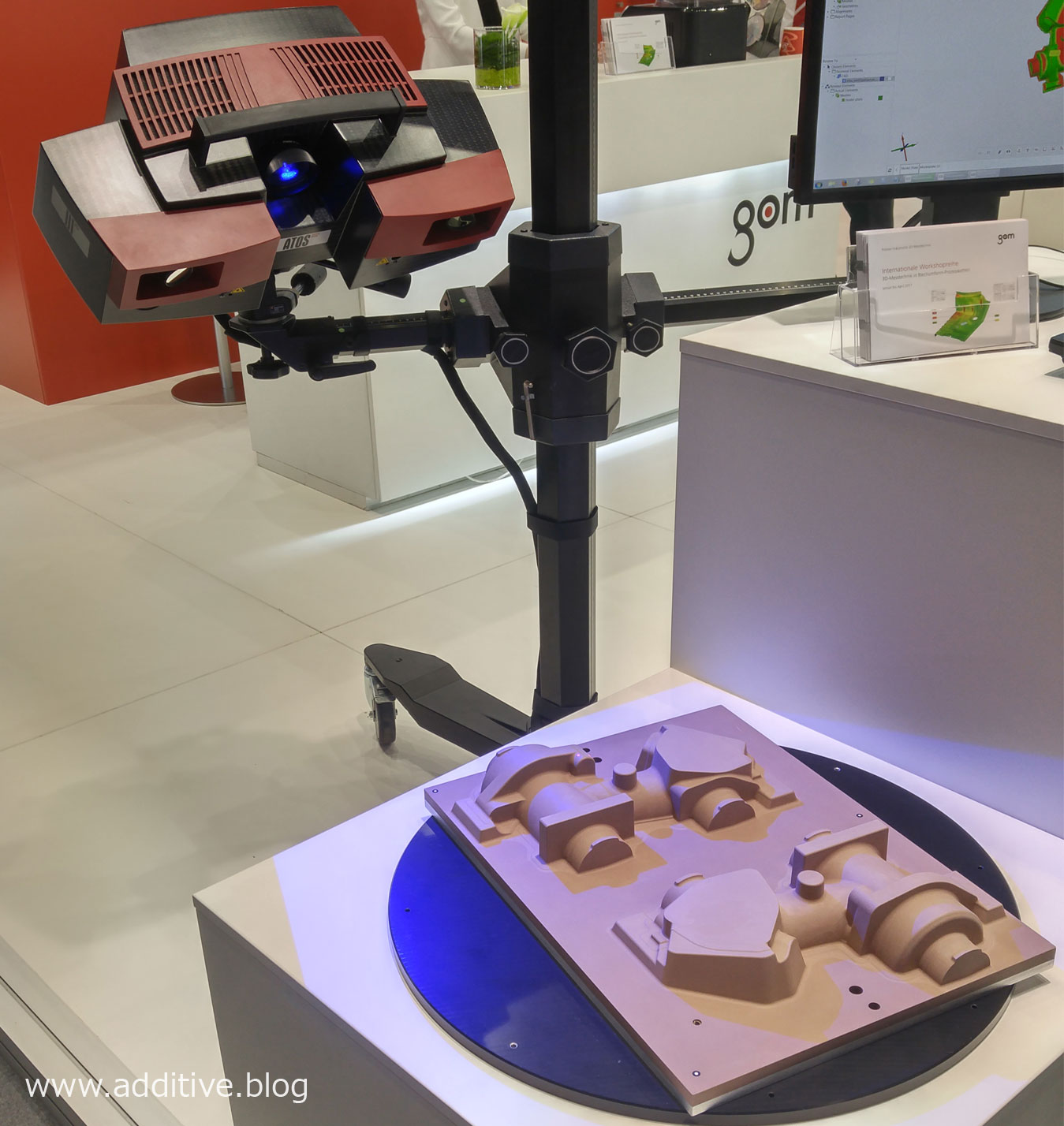 The software detects how the stripes or specific parts of the “QR code” were distorted on the surface of the scanned object. The distance between the projector and the camera is firmly set, and the angle between them is also known. The software uses all of this information to compute exact position of 3D points which represent the surface of the object. This process uses trigonometric triangulation and the result is a point cloud. As a final step, a polygon mesh is generated from the point cloud usually using Delaunay triangulation. 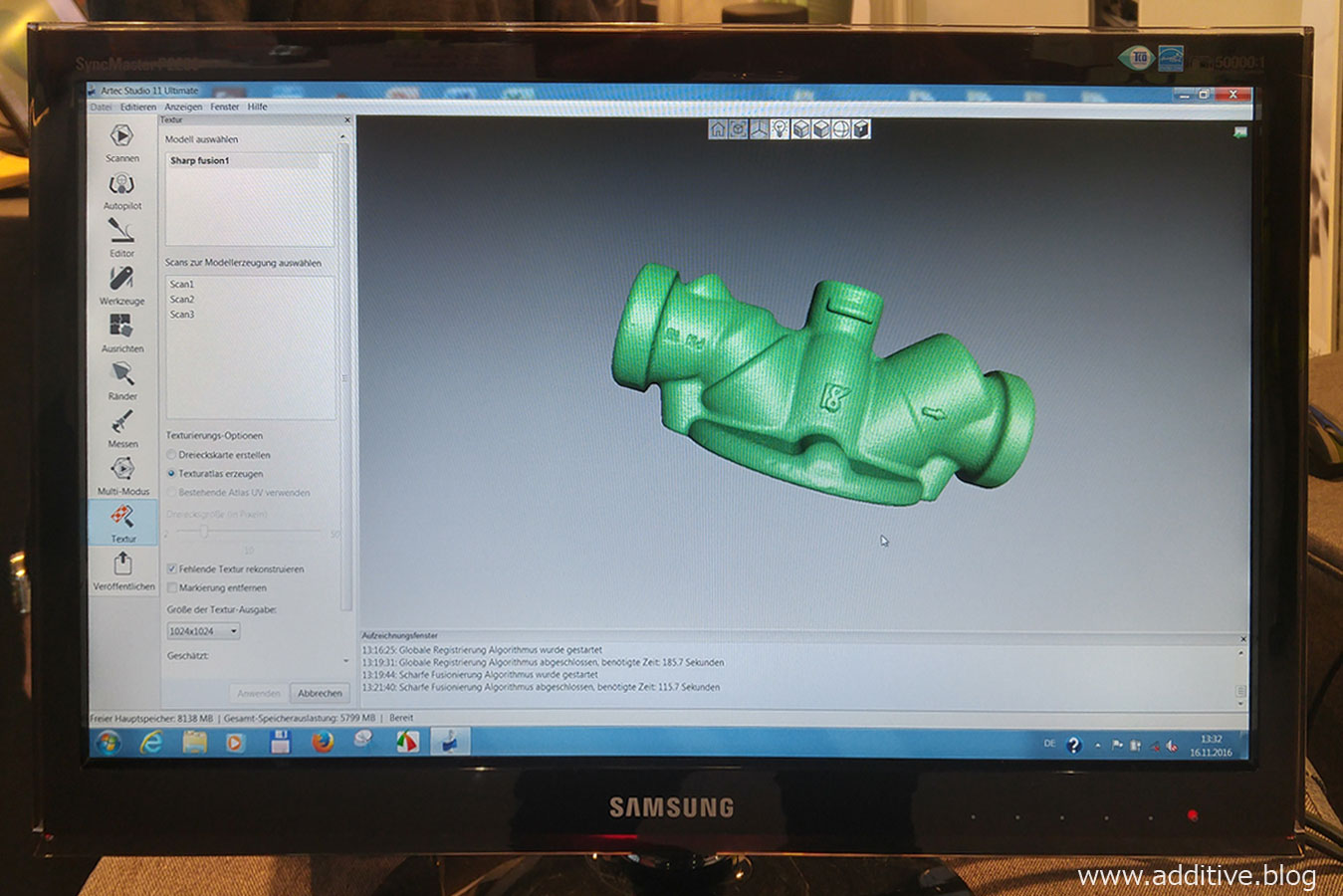 It usually takes several scans from a different angle to capture the whole object. The scans must be later aligned in software that comes with the 3D scanner. To help the software precisely align the scans, special markers in the form of round stickers are usually placed on the object. There are two types of scanners: stationary (with tripod) and mobile (handheld).

Stationary 3D scanners are frequently used with a turntable so the object can be comfortably scanned from all angles. Another option is to move the scanner itself around the object – this applies mostly to scanning big things like cars and planes.
Mobile scanners are usually held in hand and used with a portable laptop.

Structured light 3D scanners are suitable for precise and accurate scanning. Depending on configuration, these scanners can scan small objects such as jewelry to big things like an airplane.

Note: Structured light scanners use white or blue light for the projector. When scanning a strictly black surface, the scanners tends to work much worse because a majority of the light gets absorbed. Really problematic are high gloss surfaces or transparent objects. These have to be temporarily matted using powder or a special spray (for instance chalk powder, titanium powder or cyclododecane spray).

The scanners consist of a laser and an optical sensor (or multiple sensors). The scanner projects a laser beam usually in the form of several lines. The optical sensor then captures the distorted reflection of each line on the scanned object. As with structured light 3D scanning, the distance and angle between the laser emitter and the sensor are known. The software connected to the scanner generates a point cloud using trigonometric triangulation and then creates a polygon mesh.
Laser-based 3D scanners are sometimes combined with structured light scanners or photogrammetry (see below). 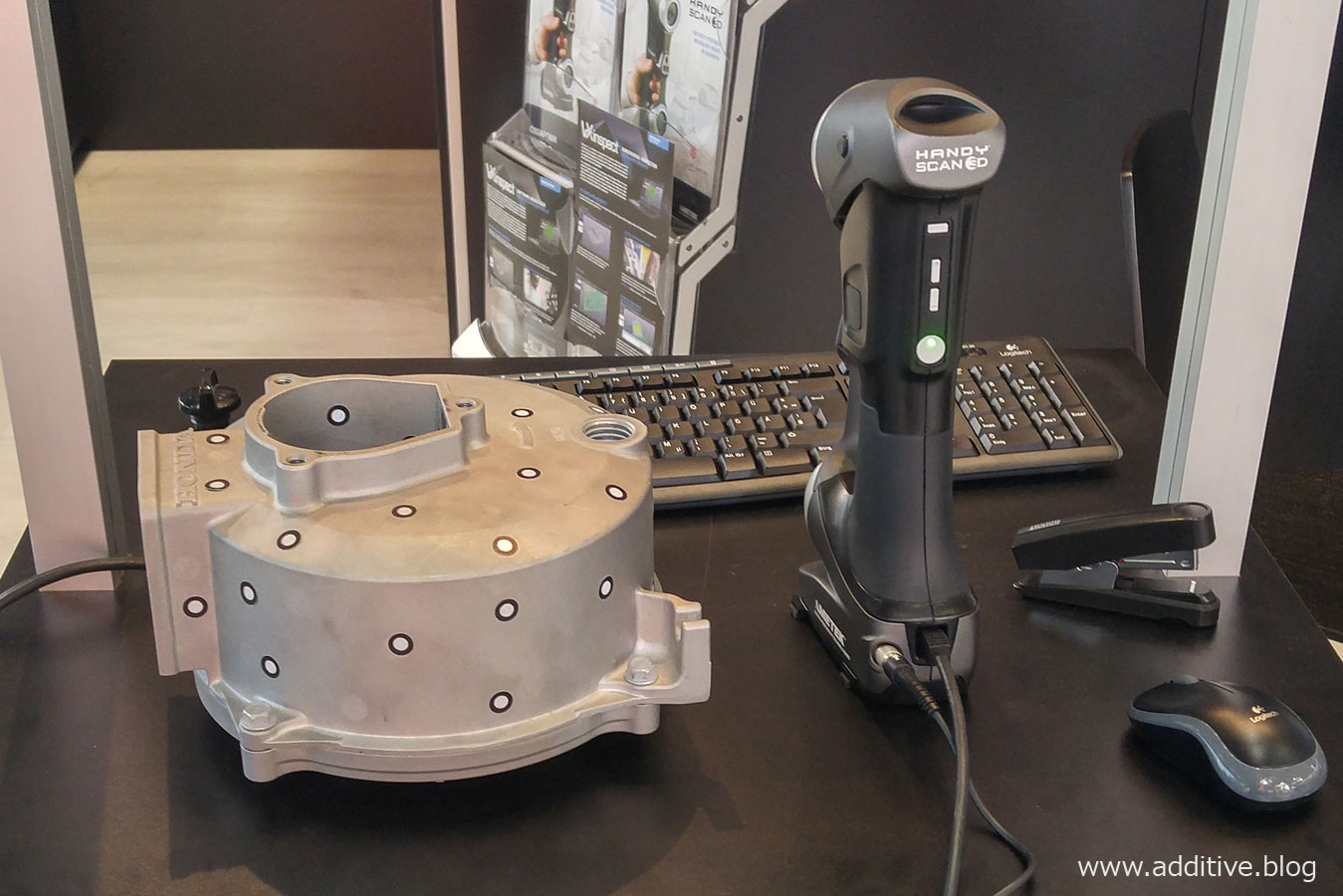 The 3D scanner consists of a laser emitter and a detector. A beam of light is emitted from the scanner in a single direction. The amount of time it takes before the detector registers a reflected beam is measured. Because the speed of light is known, the 3D scanner can compute the distance of a point from which the beam bounced back. By using a set of moving mirrors, the scanning direction is changed. The whole 3D scanner head usually rotates around its axis during 3D scanning. This way, the scanner can capture 360-degree scans. Laser pulse based scanners are stationary, capable of capturing vast outdoor or indoor areas. They are suitable for capturing objects even at great distances (cca 1000m). The output is a point cloud that can be converted to a polygon mesh.

The 3D scanner works very similarly to a pulse based 3D scanner. It emits a laser pulse with a known wavelength in a single direction. The pulse bounces back and is registered by a detector. The scanner then calculates the phase shift between the emitted and returned pulse. This information is used to calculate the distance and position of the scanned spot.
Phase shift scanners are usually moreaccurate than pulse based scanners. But the effective scanning range is shorter (cca 300m).

A photogrammetry is a popular form of 3D scanning because of its ease of use and a relatively low cost of the equipment. All you need is a good camera and special software for image processing. First, the given object is photographed from all angles. You must capture the object from all around, so there are no blind spots. The photographs must also overlap each other a lot. In simplified terms, you just go around the object, ideally in a spiral, taking picture after picture. The object itself must remain still. Proper lighting is also crucial. You want to create conditions where all areas of the object are properly lit without sharp shadows.

The software then processes the captured images on your computer. The hardware requirements are quite high, so some companies offer a cloud solution where the images are processed on a remote server. The algorithm also uses triangulation to compute a point cloud and later polygon mesh. For the algorithm to work properly, there must be enough “unique” spots in the images, so the algorithm can use them as reference points for calculations. In simplified terms, it means that single color objects are impossible to scan using this technology. To make these objects photogrammetry “friendly” add some random marks on them using color magic markers or paint. The more colorful and random, the better. A glossy and transparent object must be matted, ideally in a similar way.

A great advantage of this scanning technology is its ability to create full-color 3D scans. It is frequently used in the film and video game industry. There are also setups of multiple cameras able to capture in a split of a second, for example, a kickboxer in the air.

One disadvantage of this technology is that the resulting 3D models lack original dimensions. If proper units and scale are important to you, you must also capture some reference objects in your scan from which you will be able to scale the 3D model properly. Some advanced 3D scanning solutions provide special markers which are placed around the scanned object and are later recognized by the software.

A nice list of freeware photogrammetry software can be found here.

The scanner uses x-rays which pass through the scanned object and are registered by a sensor afterward. In the case of a Medical CT scanner, the x-ray source rotates around the patient. In the case of an Industrial CT scanner, the x-ray source is still, and a given object rotates on a platform in front of it. Next, several series of 2D radiographic images are obtained from different angles. The CT grayscale images are later converted to a 3D point cloud from which polygon mesh is generated.

CT scanners have a unique ability to capture the internal geometry of any part. It is frequently used for inspection of various industrial components. The machines themselves are quite expensive, but many companies are offering CT scanning as a service. When combined with 3D printing, you can duplicate any object within hours.